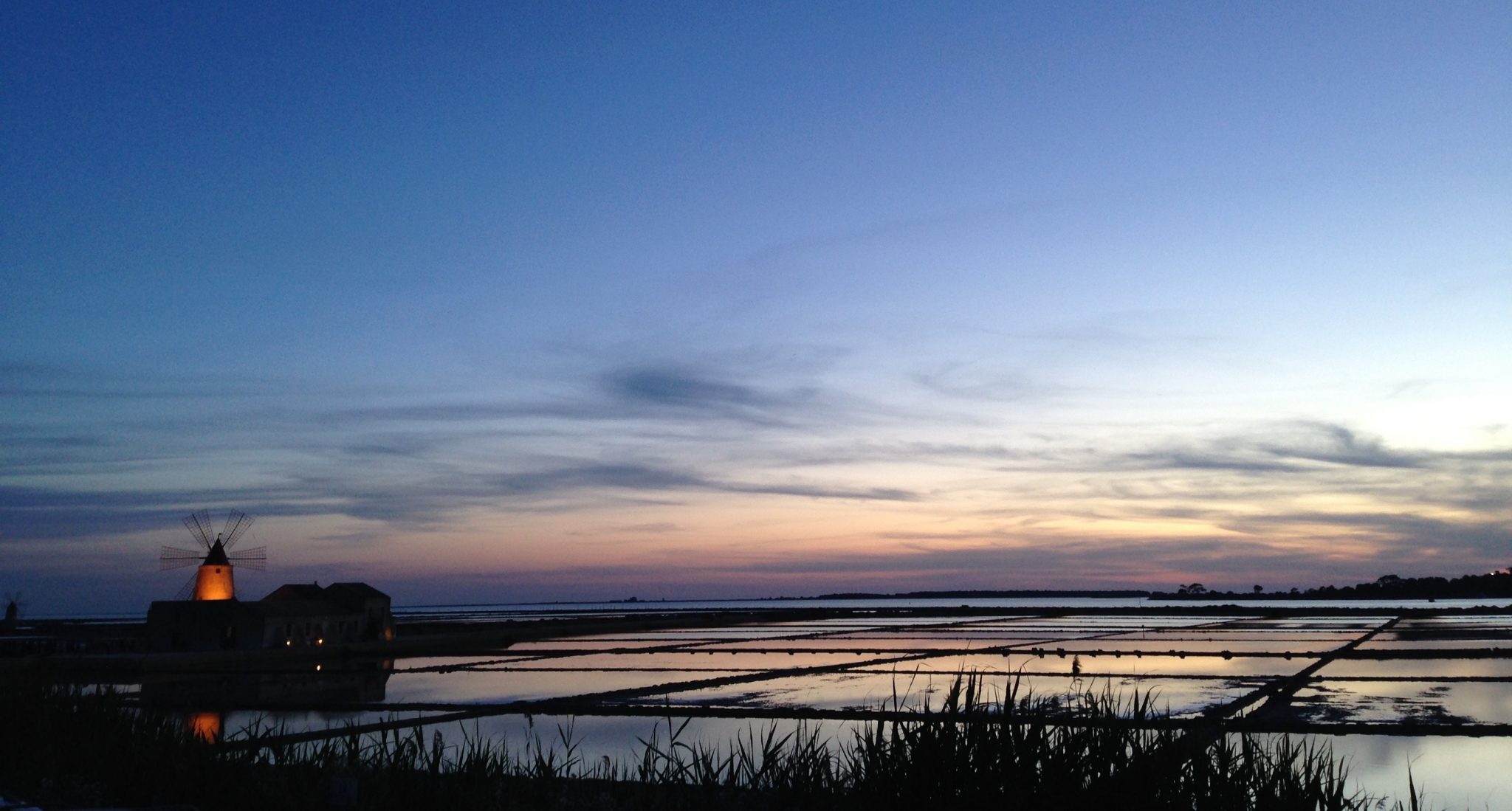 Italy’s most southern region, the island of Sicily is unique from the rest of Italy through its cuisine, traditions, language and architecture. Being the largest island in the Mediterranean Sea, Sicily has kilometers upon kilometers of coastal beauty.

We’ve been to Sicily multiple times and our #1 suggestion would be to not stay in just one area, but to explore along the coast as well as the satellite islands. We found the best way to do this is by renting a car. 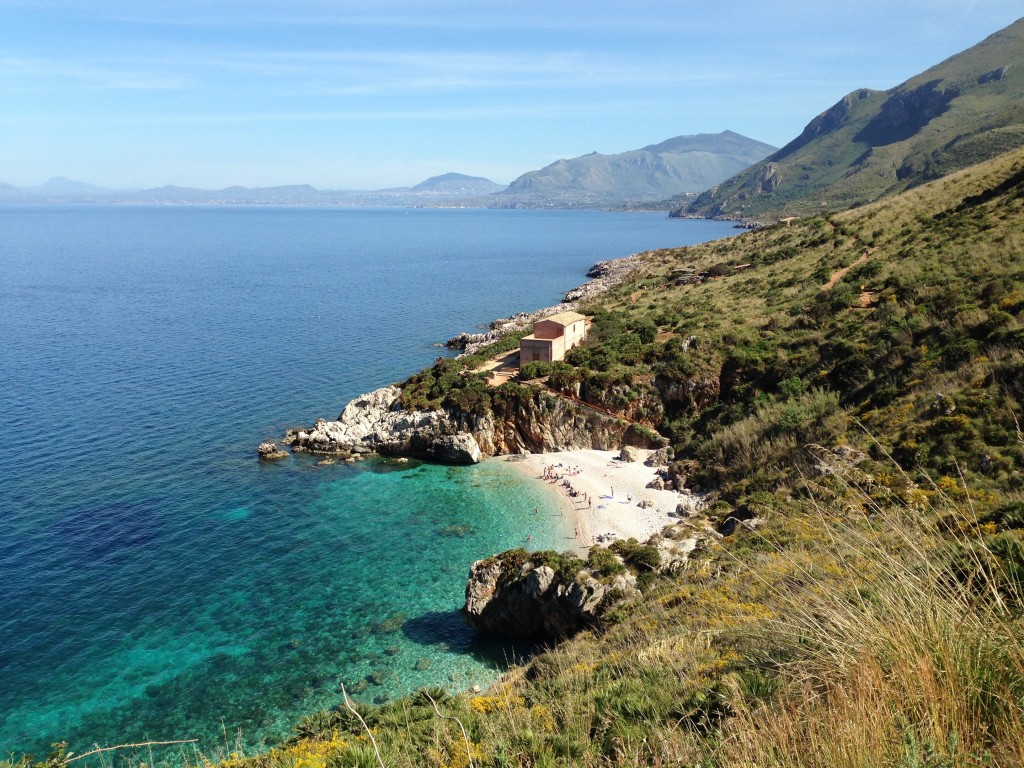 Views from the Zingaro Nature Reserve. 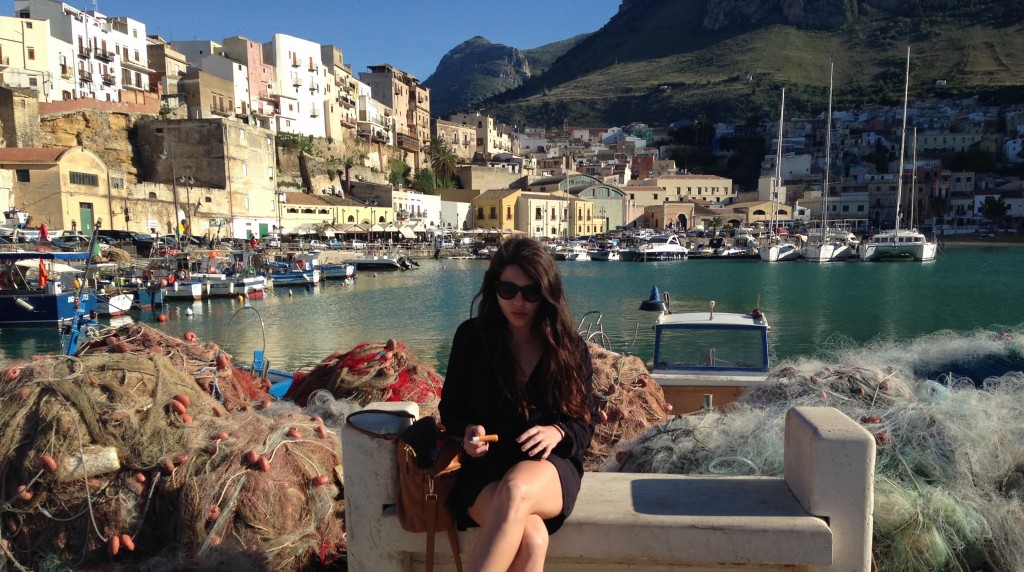 Here is a (very edited) list of what to see, eat and drink in Sicily:

Our favourite city to stay in Sicily, because it has a large port where you can easily take a ferryboat to various Sicilian satellite islands, such as Favingana. You can get really great authentic Sicilian dishes along with an authentic Sicilian atmosphere.

Fresh fish dishes, a bit on the fancier side (for Sicily) but still not too expensive, roughly 35/40 euros each.

It’s like eating at your long lost Sicilian grandparents’ house. 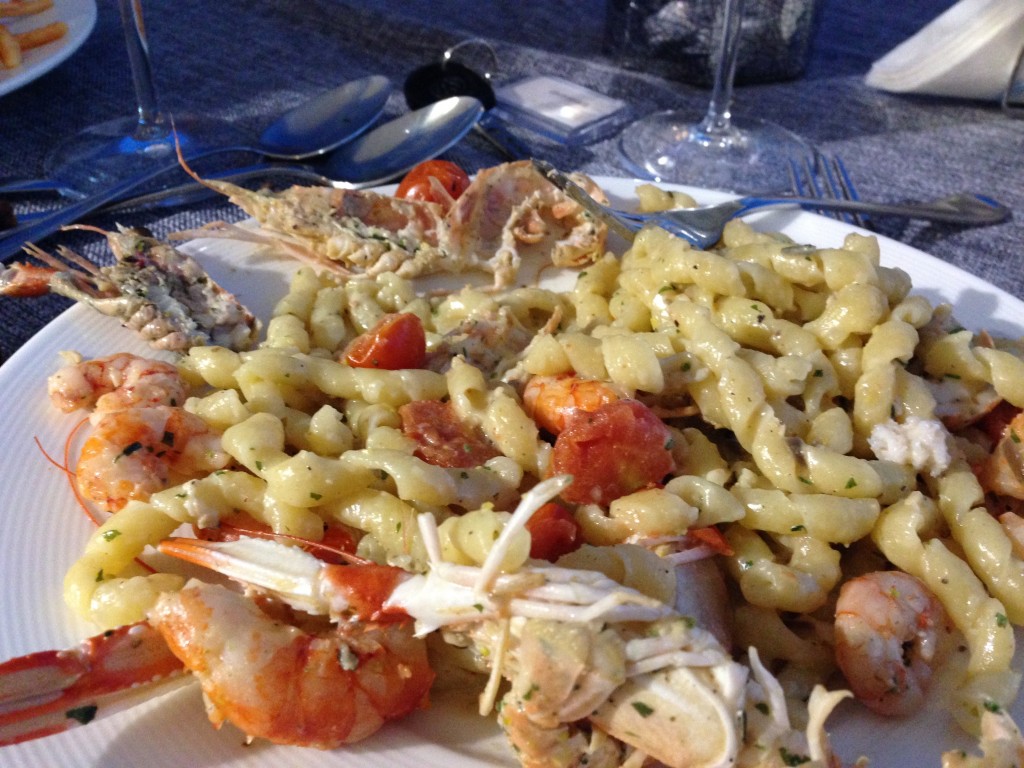 Best Cannoli in Trapani is at Efri Bar – Via Conte Augostino Pepoli,166

No doubt the best cannoli, I’m not the biggest cannoli fan, but theirs is AMAZING! 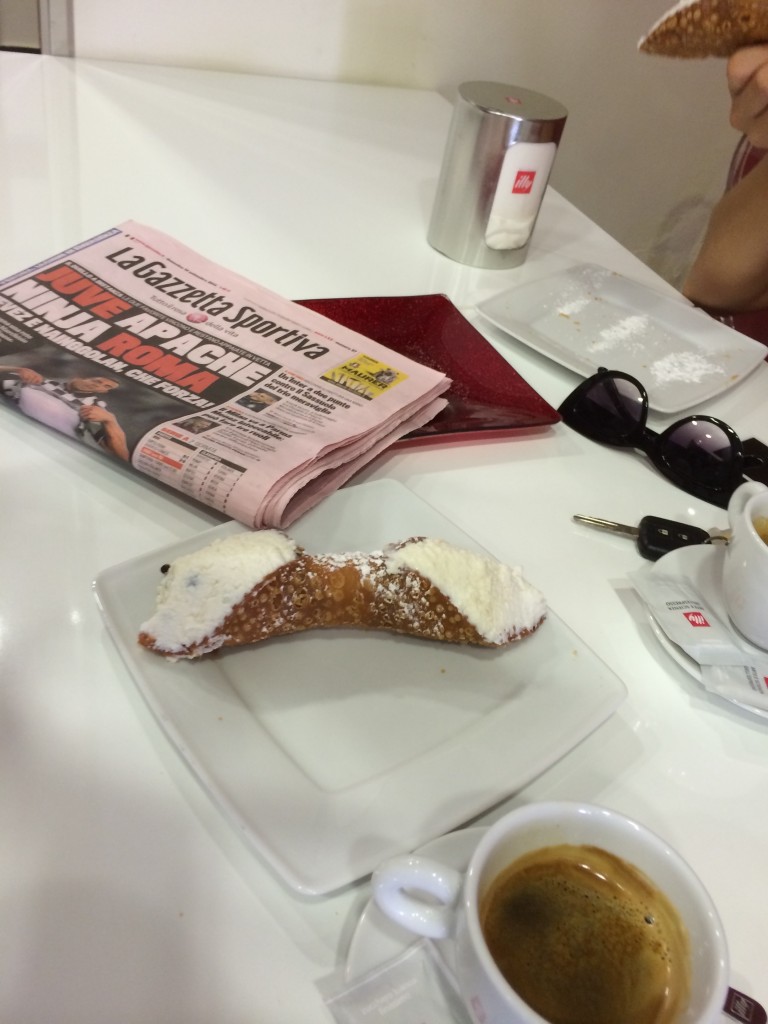 It is a small island off the coast of Sicily; you can take a ferryboat from Trapani. Rent a bike, you can easily bike the whole island in a couple hours. There are many breathtaking beaches on this island such as Cala Rossa and Cala Azzura. There’s also a small mountain with an abandoned monastery at the top that you can hike up to, if you are not afraid of heights. The views from the top are totally worth the hike.

The Zingaro Nature Reserve is the first natural reserve established in Sicily. It stretches along about 7 kilometers of coastline of the Gulf of Castellammare, where you can hike the coastline and come across a new beach every ten minutes, each more gorgeous than the last. To get to Zingaro by car is about 1hr from Trapani. 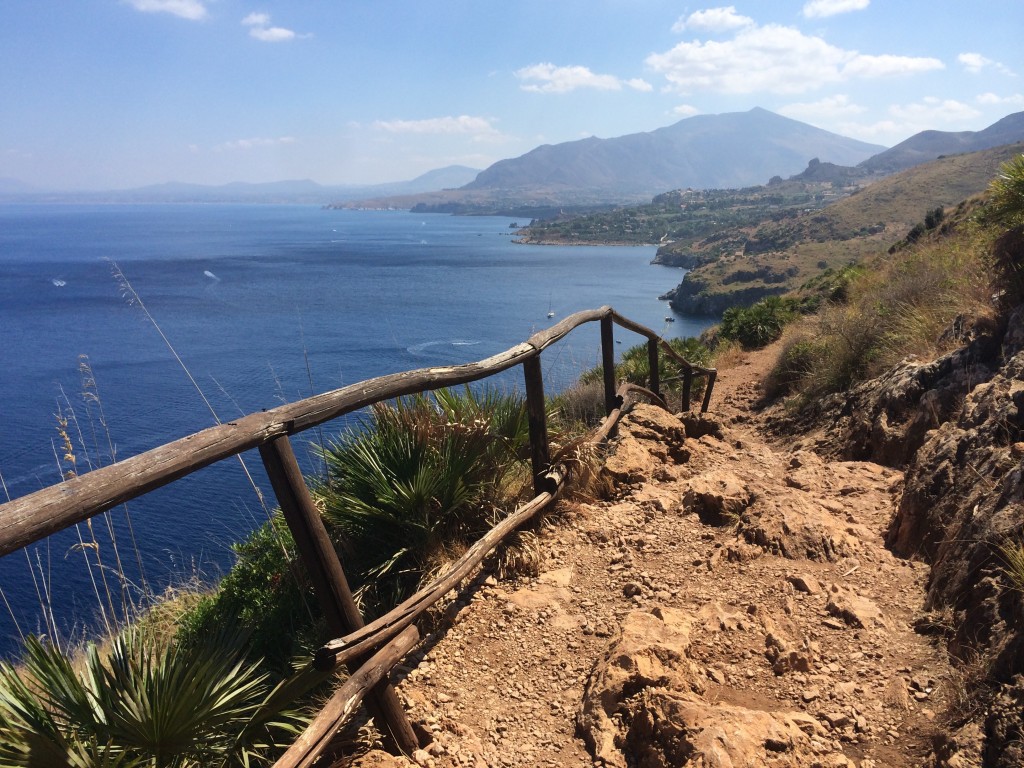 Hiking the coast of the Riserva dello Zingaro.

Sicily was part of Magna Grecia (ancient Greece), so there are many temples and ruins scattered throughout the island, however the most recent and intact temple is the temple of Segesta. Nestled in the mainland hills is the temple and Amphitheatre that looks virtually untouched. This pagan temple is more intact than the Parthenon by far and has much less tourism since it’s fairly new and not as commercial (yet). 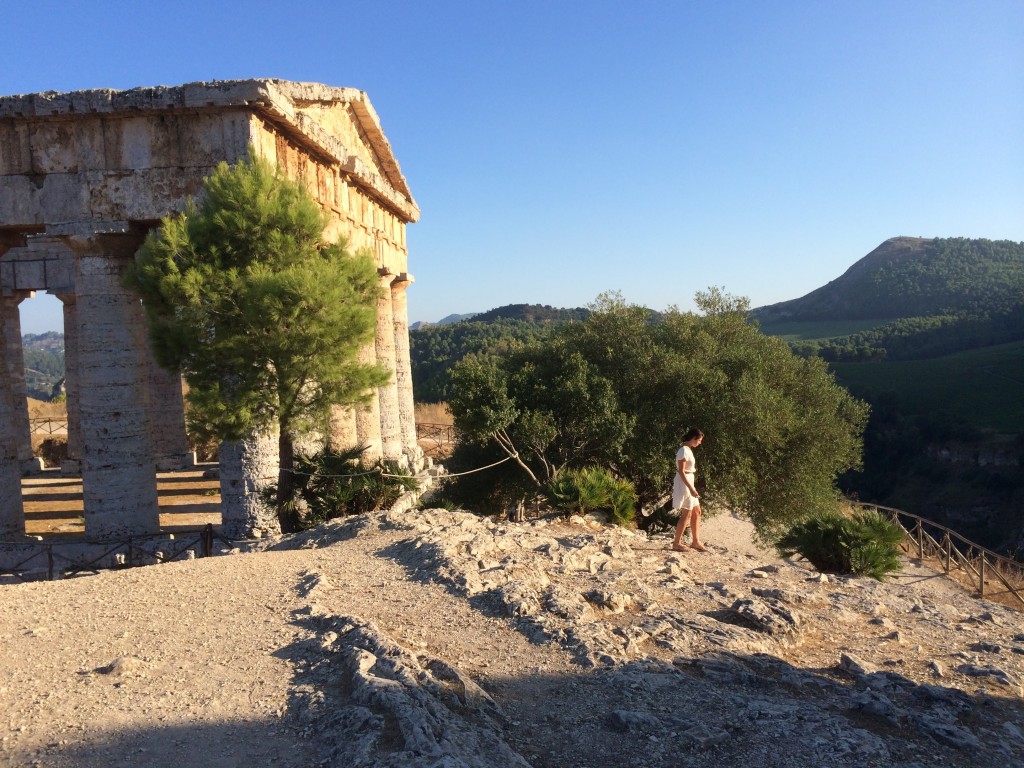 You’ll never see a sunset like a sunset on a saline. The extra salty water reflects the colours of the sky so everything is lit up by the refection, full of pink, red and orange. This is the best place to do a sunset aperitivo.

Sicilian sea salt is rich in minerals such as iodine, fluorine, magnesium, and potassium, with a slightly lower percentage of sodium chloride than regular table salt. Saltpans are filled with seawater in the spring and left to evaporate, relying on the heat of the Sicilian sun and strong African winds. Harvesting takes place once the water has evaporated, and then the salt is crushed and ground without any more refining. These salts are packed with flavour, without being too strong or salty. They work well on salads or with roasts and sauces. Great as a garnish on bruschetta. 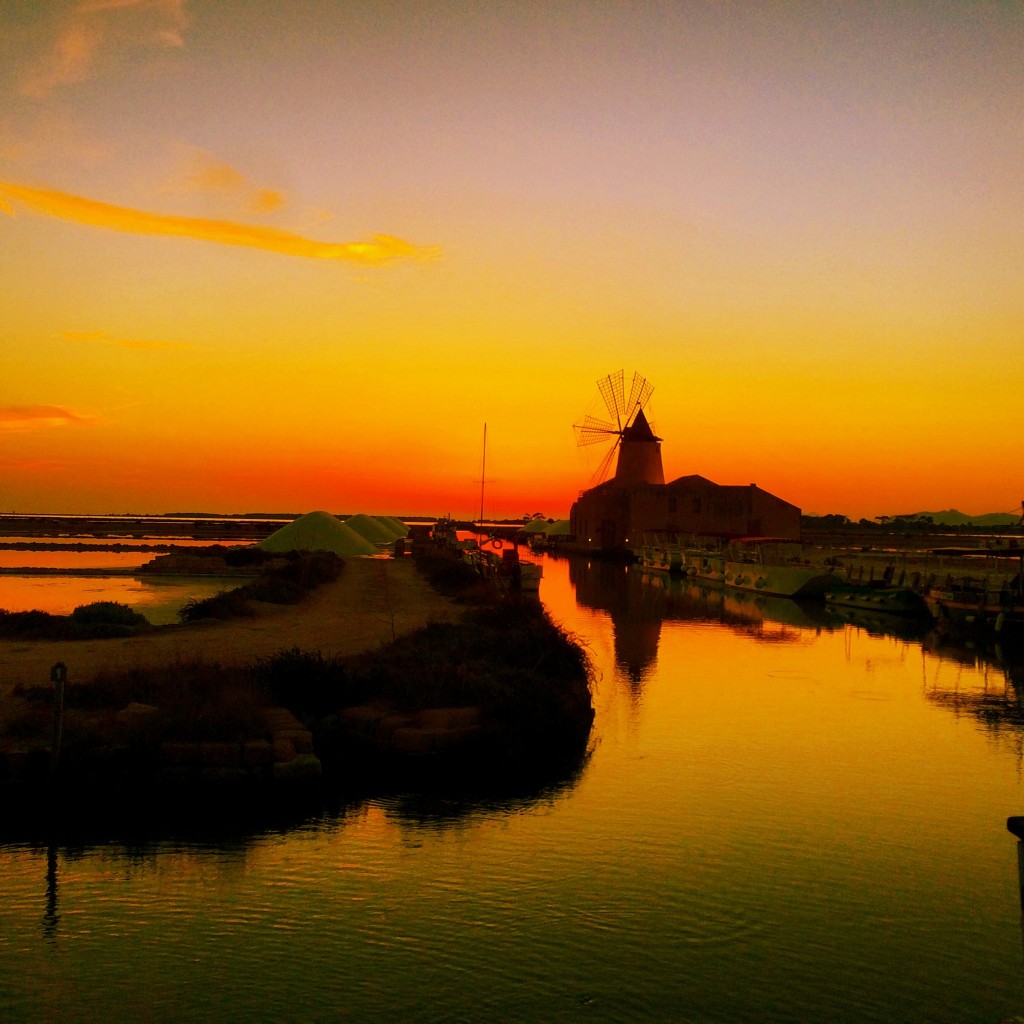 Mothia is very close to Marsala. The little town that gives the name to a great DOC wine, with a very particular history. It’s similar to Port, Madeira or Sherry, and it was first produced by John Woodhouse, anEnglish trader, at the end of the 18th century.

We tried a Florio Baglio, Marsala Vergine, with a beautiful amber color. It is a pretty complex wine, with a lot of flavours that last for a good while in your mouth.

Have it with a nice cassata (a typical Sicilian cake) in front of a sunset like the one in the picture above, you won’t forget the experience.